If you are into online gaming, then you must have heard about or have played the game World of Warcraft. It is one of the most massively multiplayer online role-playing games, which was released by Blizzard Entertainment in 2004 and has been one of the most popular and most played games yet. The game has a player count of millions and still continues to increase by this day. You start as an avatar in the game and team up with players to complete missions and another rewarding quest. However, the game has a major flaw as well, especially for new players. When you start as a new player, you need to do various tasks to level up. Leveling up makes sure that your player gets additional skills and rewards. Also Read What is dot world of warcraft.

However, leveling up naturally while playing the game is rather slow and proves to be a disadvantage against experienced players. But this is something that did not let the game experience degrade for new users. Fortunately, there are a lot of different add-ons that you can use in the game to make it much more interesting and rewarding. We have listed some of the best addons for World of Warcraft from WikiWax.com, which you definitely use while playing the game. These add ons will not only help you to customize your avatar but also help in getting some rare skills. Also, some addons will completely change the environment and the look of the game to provide fresh and more attractive gameplay.

It is one of the most commonly and popularly used addons on the game. it provides the user with a revamp of the game interface and adds a lot of new features to the screen as well. It will add things like an inventory bar, the ability to see grey items, and perform repairs automatically. It will configure based on your character’s rank and the role and also provides options to customize keys. This addon brings all the necessary information about the player on your playing screen, which makes it much easier for the player to know the kind of resources they have left before entering a quest. The best part about this add-on is that it gets regularly updated.

It is also one of the most popular addons which could guide the user before they enter any kind of mission or quest. It would allow the user to understand what kind of achievements and skills they have in their inventory. It would help you to track your rare kills, treasures, pers, and everything else you are missing and display them by zone or area your player is currently in. It would help the player to go to a specific area and achieve the specific skill or complete that task to earn rewards. The Addon has been optimized in such a way that it does not slow down the game.

Boss fights are the main parts of the game, which allows the users to fight and defeat the boss to earn multiple types of skills and rewards in return. However, boss fights are not easy to win and this add-on would definitely make this task a lot easier. This add-on can be used in a boss fight and it helps you to know important things before it is about to happen. For example, it will notify you that the boss is about to use a spell or is about to attack your teammate. It is very beneficial to fight a boss character who is very tricky and not easy to defeat. It also has a lot of funny choices in the sound files that you can use.

GTFO is a great addon that works as a warning notification. It will sound a blaring alarm as soon as your player is in harm’s way. For example, if your player is standing in fire, it will sound the alarm informing you that the health is getting damaged. Similarly, it will let you know when you have been hit by a spell or weapon. The addon is specifically very useful when you are fighting the boss character. Since it lets you know about the harmful hits and spots, you are always looking out for a safe place. 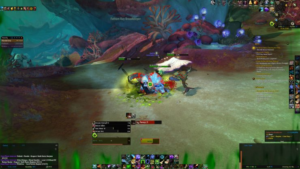 So these are some of the most popular and used addons that are regularly used by players in World of Warcraft. World of Warcraft is one of the best online multiplayer role-playing games that you will ever come across. If you still haven’t played the game till now, then this would be the right time to go and play the free online game. Also, using the addons would certainly give you a lot more advantages than simply playing the game without one. So, download the addons and enjoy the game played by millions.