Kushal Arora is an Indian Blogger who is in to make money online industry for quite a while now, He has been into this field by passion as he uses to love technology and talk about it with his friends and family, he always wanted to do something other than those traditional things that Indians are up to like engineering or becoming a doctor or even maybe get into government jobs.

Not that because he was not good in studies rather he was decent yet above average if not the topper of the school that because he didn’t want to do all this but he didn’t have much interest in that typical corporate rat race that is followed by most other Indian Students, as his father has himself being a Self Made Man he also was very fascinated by his dad’s struggle and wanted to do the same with his carrier too.

Who Is Kushal Arora? 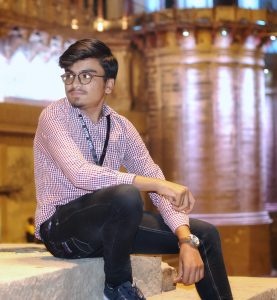 Kushal Arora is an 18 Old Young Adult who has just passed class 12th with Commerce, He is into Blogging, Affiliate Marketing and Make Money Online, as he had a keen interest in technology he wanted to share that knowledge with the world so he got into in the field.

He currently lives in Varanasi with his parents soon plans to move out for his higher education to some other city for the betterment of his carrier opportunities as well as his studies as he will continue to complete his graduation too.

His answer for completing graduation even after earning good Money he says “I know that education has to do nothing directly with my carrier but also where ever I Stand today in business terms is all because of the stream he chooses in his high school” so that is why he wants to complete the basic graduation along with his he being following his passion and building a startup around it.

He shares he started his first blog back in 2016 when his school summer vacations were going on as his other friends where busy wasting time and playing he wanted to do something of his own and be productive in those days, and guess what he started his first blog and definitely the first one failed but he didn’t stop he kept researching improving his knowledge about Blogging and SEO and later after a lot of failures he finally figured out the thing and now after 4 years he earns a good amount of money from blogging and digital marketing.

Currently, he was not very comfortable sharing the exact figures of his earnings but he shares he earns a good amount in four figures in dollars. Which is way more than the corporate jobs and other average jobs here in India,

So at the end of this to all those youngsters, he wants to say that always look at other options too don’t just follow the typical rat race. Always do something out of the box if you want to make big money out of your life. Else you will end up working till your last breath and never experience the freedom of success.

Zoom recorder: How to do it

Marketing for Breweries: 4 Excellent Ideas to Promote Your Business