by raihan Ahmed
in News
0

Rome, along with Florence and Venice, is the most visited Italian city of art by the many foreign tourists who come every year (especially before the epidemic that devastated the world) to visit it, to discover its majestic ancient ruins, its many churches and its artistic jewels of the Renaissance and Baroque.

Like many other cities, however, Rome also hides some mysterious and haunting places, endowed with a vaguely morbid charm that magnetically attracts visitors who are passionate about the macabre, the occult and the unusual.

With the help of Rome Guides, let’s discover the secret and hidden face of the Italian Capital, including forbidden areas and hidden places sometimes unknown even to the inhabitants of Rome. Here are the seven most mysterious and unusual places to visit in the Eternal City, seven as the hills of Rome and the legendary kings of the ancient city, seven as the number considered magical by the ancient Romans.

1.The Museum of the Souls in Purgatory

The Museum of the Souls in Purgatory is a disturbing place, full of mysteries and legends: it is installed inside the neo-gothic Church of the Sacred Heart of Suffrage, built in 1890, and was established thanks to the French Father Jouët, to whom we owe most of the exhibits.

The birth of this exhibition place is due to a disastrous and at the same time creepy event that dates back to 1897, when a terrible fire broke out in the church: after a frantic extinguishing of the flames, the persons who were present noticed that behind the altar a face had been imprinted, which was reconnected to a soul from Purgatory imprisoned in the flames. This mysterious event encouraged Father Jouët to turn the place into the site of a small exhibition gallery, with objects referring to the contact between the world of the living and the world of the dead. Over the years, the Museum has collected disturbing relics from all over Europe such as tablets, books and clothes with footprints of the dead.

One of the relics with the clearest prints is the nightgown belonging to Joseph Leleux, which bears on the sleeve the burn of the hand of his mother who died in 1762. The supernatural event took place in 1789, when the deceased woman appeared before her son during the night, reproaching him for the dissolute life he was leading and for the fact that he had forgotten her in his prayers. The son was so impressed by the spirit’s words that he completely changed his life, arriving just a few steps away from sanctity.

If in your life you have been terrorized by the movie “Child’s Play“, then there is a place, not far from Piazza Borghese, to stay away from: this place has been nicknamed by the Romans “the Doll Clinic” and is both romantic and gloomy. From the outside, as you stroll around Rome, you can see the dull storefront of an old craft business containing doll heads and other pieces, put there waiting for new life.

As you enter, you may realize how small the store is, and how it is actually a real workshop for the repair of porcelain objects and antiques in general, marked by a pungent smell of glue. 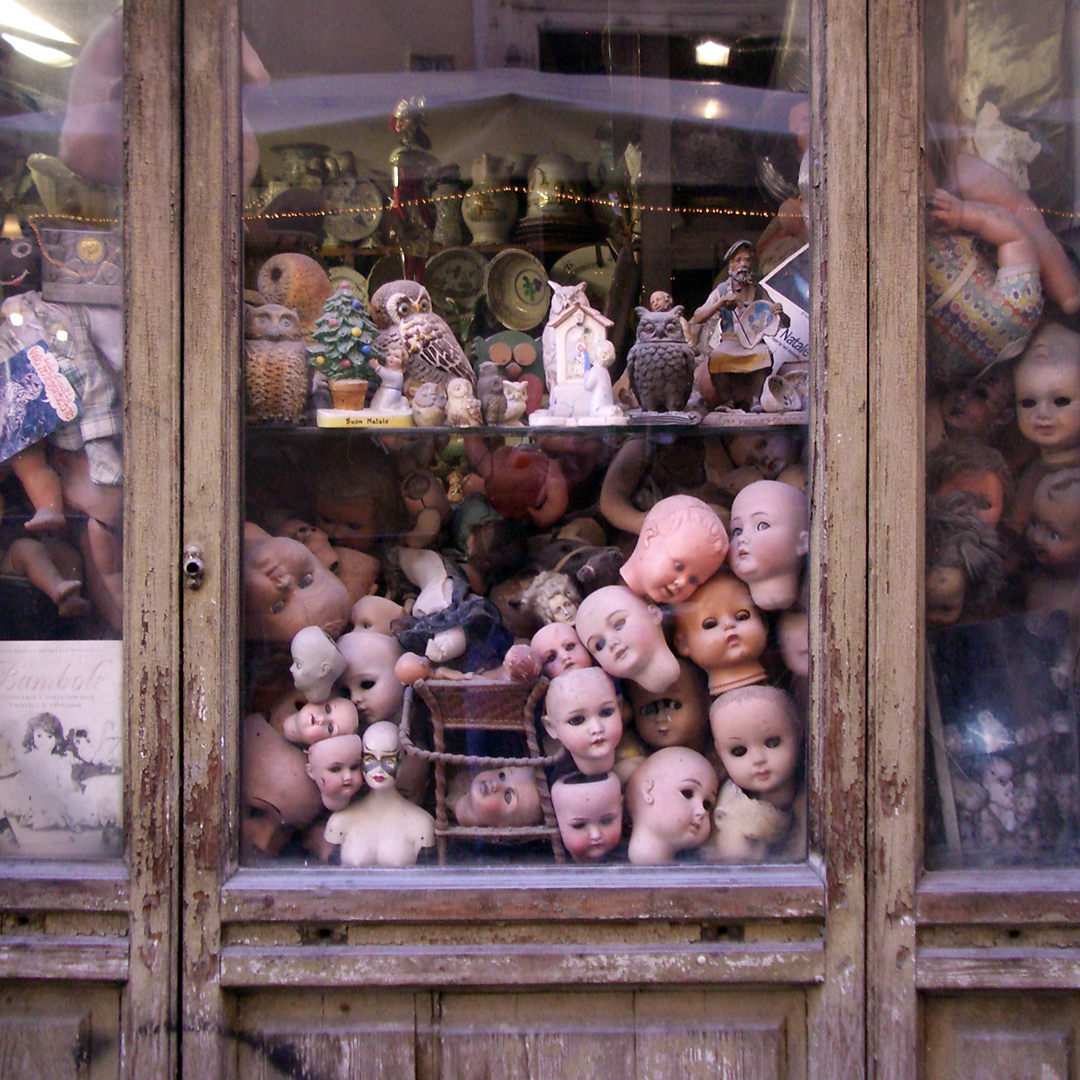 The place is definitely gloomy and dismal, and brings to mind the ancestral fears that we felt as children: at the same time, it is a clear invitation not to stop at appearances, because between those disturbing doll heads is hidden the love of those who try to care for them and recover them.

In a northern district of Rome you can admire the remains of a tomb in brick dating from the 2nd Century AD and nicknamed by the Romans “the Devil’s Chair”, since it resembles in its present form an imposing chair with arms and backrest.

With regard to the singular demonic meaning, there are many legendary tales that accompany its history. Shepherds and wanderers often used it as a shelter and lit fires that, with the darkness, gave the structure a gloomy and disturbing appearance. In the Middle Ages, then, it was believed that Satan had used the ruin as a throne, so that it would be the scene of banquets, orgies and other esoteric and propitiatory rites, organized by the Devil’s followers. Constantly surrounded by an aura of mystery and magic, the monument seemed to be able to give the gift of prescience and healing abilities.

This place fascinates and disquiets especially at night. Designed at the beginning of the 20th Century by architect Gino Coppedè, the neighborhood (named after its creator) is an incredible mix of Art Nouveau and neo-Gothic architecture, sprinkled with esoteric and Masonic elements.

This place, which during the day strikes the viewers for the richness of its decorations and the symbols contained in every single corner, turns at night into a gloomy and disturbing place: thanks to its creepy atmosphere, the Coppedè District has often been used as a setting for horror movies by great Italian directors, such as Dario Argento in “The bird with crystal wings“.

Among the buildings that most distinguish it are the Villa of the Fairies, the Palace of the Spider and the Fountain of the Frogs, all linked to Templar symbolism and religious architecture of Gothic cathedrals.

5.The Museum Laboratory of the Mind

The Museum Laboratory of the Mind is a narrative museum that aims to document the history of the institution of asylums in Italy and to elaborate an ongoing reflection on the paradigm between health and illness, on mental alterations, on the politics of care and on the involvement of the community.

The tour develops in one of the pavilions of the former Roman asylum of Santa Maria della Pietà in an immersive and multimedia setting that involves the visitor in a continuous oscillation between real and virtual elements, stimulating the active participation of the public. 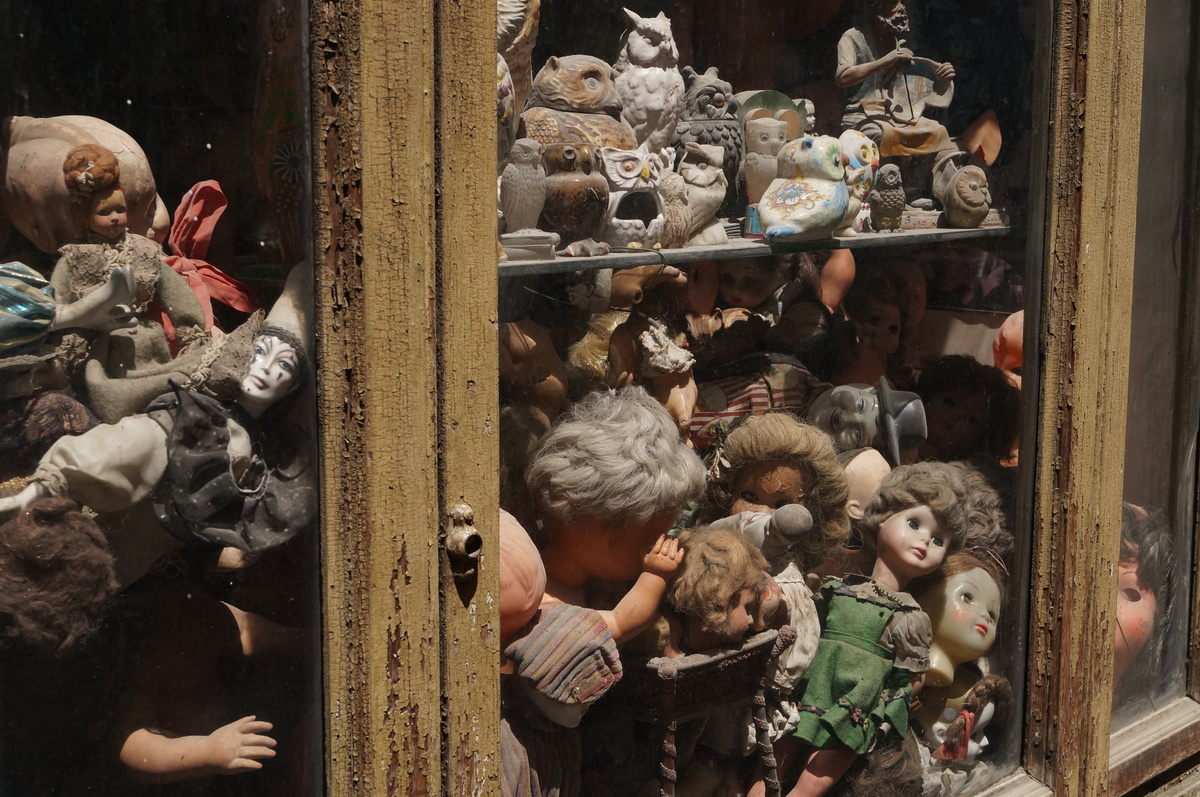 Inside the Museum, an evocative path develops in seven areas, among documentary evidence and medical practices of 500 years of activity. At the entrance you are greeted by hundreds of looks of sick people that generate a lot of anxiety. You can also access the “Ames Chamber”, a place outside of space and time that reproduces the perception in the mind of those who were labeled as crazy.

6.The Crypt of the Capuchins

Along Via Veneto, right next to the Barberini Square, you can visit the imposing Church of Santa Maria della Concezione, better known as the Church of the Capuchins, whose underground crypt is a place both sacred and macabre, where the mortal remains of the Capuchin fathers have been buried for four hundred years. If you would like to visit this place, you could contact the Association Rome Guides sending an email to organize the tour.

This particular place was born from the practical necessity of having to find a place for the new deceased to be laid to rest in the small cemetery of the convent, also giving a worthy location to the bones of the exhumed friars. In this way, hopes for eternal life and resurrection became the main motivation for an artistic composition that was at once ingenious and mournful, surprising and gloomy.

The bones of the poor religious dead began to be systematically placed along the walls and on the ceilings, following a pre-established artistic decoration. In the crypt, consisting of a long corridor flanked by six rooms, the mortal remains of as many as 3,700 deceased were collected and tradition has it that the soil of this cemetery is “holy” because it was transported directly from the Holy Land.

What makes this crypt unique, however, is its decoration. Entering the Crypt, the visitors will be welcomed by decorations formed by skulls, femurs, tibias, heels, sacred bones and vertebrae that, in a game of full and empty spaces, compose not only drawings and symbols, but real architectural structures, with arches, vaults, columns and niches in which skeletons of friars, still wearing their habit, seem to pray, sleep or greet the visitors.

A woman, the Princess Barberini, was also buried in the Crypt: her small skeleton, enclosed in an oval, holds a scythe in her right hand and scales in her left (also made from human bones), symbols of the inexorability and equity of death and the Final Judgement.

In Piazza Vittorio, not far from Termini Station and the Basilica of St. Mary Major, you can see a curious assemblage of statues and esoteric symbols. The Magic Door, also known as the Alchemical Door, is one of the most significant remains of Villa Palombara, a majestic villa that stood on the Esquiline Hill before the urbanization of the area: according to the legend, the door was connected to the philosopher’s stone and to the eccentric studies of the famous alchemist who owned the villa.

Its original position was, however, a hundred meters from the current location, but in 1873 the Magic Door was dismantled and rebuilt in 1888 within the gardens of Piazza Vittorio: next to it were added two statues of the god Bes, which were originally in the gardens of the Quirinal Palace.

The interest and curiosity that the Magic Door creates are due to the fact that it is accompanied by alchemical and esoteric symbols engraved in the marble frame. According to legend, the alchemist Francesco Giuseppe Borri, who had just been released from the jail of Castel Sant’Angelo following accusations of heresy and poisoning, was hosted by the Marquis Palombara in his villa for several years. The legend says that Borri spent a night in the gardens of the villa in search of a mysterious herb capable of producing gold, and the next morning he was seen disappearing forever through the door, leaving behind some golden straws, the result of successful alchemical transmutation, and a mysterious paper full of enigmas and magical symbols that should contain the secret of the philosopher’s stone. The Marquis tried in vain to decipher the content of the manuscript and all its symbols and enigmas, until he decided to make the content of the manuscript public, having it engraved on the door of Villa Palombara, in the hope that one day someone would be able to decipher the alchemical message.

The symbols engraved on the Magic Door are in reality classic illustrations of books on alchemy and esoteric philosophy of the second half of the 17th Century, of which Marquis Palombara’s library was particularly rich. In particular, the alchemical symbols follow, with some slight differences, the sequence of planets associated to the corresponding metals: Saturn-lead, Jupiter-tin, Mars-iron, Venus-copper, Moon-silver, Mercury-mercury.

In any case, even today it is possible to see sporadically some passionate of esotericism intent to transcribe on his notebook all the symbols, in the hope of being able to decipher them and get rich by transforming lead into gold…

4 ways your license could be suspended

5 ways to to manage your online space

Choosing The Right Cigar To Go With Your Whiskey

How to Make Sure Your Holiday Gatherings are Fun