Which Headsets are Better for Gaming? – Wired or Wireless?

In this great technological era, everything is changing its manner. Everyone has heard the phrase, "Necessity is the mother of all invention." As humankind felt the need for something, they've found a way to achieve it.

by raihan ahmed
in Entertainment
0

In this great technological era, everything is changing its manner. Everyone has heard the phrase, “Necessity is the mother of all invention.” As humankind felt the need for something, they’ve found a way to achieve it.

The same goes for headsets and headphones. Humanity has made headphones wireless to ease their needs. However, there is a catch to everything. With the advantages of Wireless headsets comes the disadvantages as well.

First of all, we need to understand the types of wireless headsets. There are basically two types of Wireless Headsets that are as followed.

The Bluetooth wireless headsets use Bluetooth connectivity to exchange the sound signals between the devices and the headsets. Bluetooth Headsets’ advantages are that they can be connected to various devices with Bluetooth support, and they cost fewer bucks than WiFi headsets.

However, their range of connectivity is small, and they offer lesser sound quality as well.

WiFi wireless headsets use 2.4 GHz radio signals for connectivity, and thus they offer a longer range of connections. Furthermore, the sound quality is also excellent as compared to Bluetooth headsets.

But they are very costly and require a special dongle for connection, therefore, limiting their compatibility.

Let’s continue the real topic. Which Headsets are better for gaming, Wired, or Wireless? The answer to that question is not that simple.

I have attached a shot from a Reddit discussion on wired headsets vs wireless. 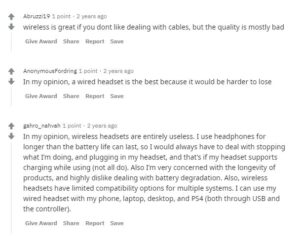 It’s common knowledge that the technology is not advanced enough to send wireless signals more efficiently than wires. Meaning that wires have the upper hand in transferring the signals, whether it’s for headphones or not.

For gamers, if you prefer gaming on a desk in front of your PC, then wired headsets are a better choice for you. They will give you better sound positioning and without sound delay (possible in wireless headsets). And these are crucial factors for gamers to look upon.

Most of the Professional Competitive Gamers prefer wired technology because they offer less delay in the signal. As for them, even a millisecond of delay can make a huge difference.

You can also check some good gaming headphones under $50 from here.

Now this section will mostly point out CONs in both types of headsets.

Starting with Wired Headsets. The wires in a wired headset limit the movement greatly. The user will not be able to move further away from their desks. And the wires can also get difficult to manage as they can tangle themselves as well.

On the other hand, the wireless headset will allow you to move freely away from your desk or table. It’s better if you prefer to lay back on your couch and game on your TV. However, wireless headsets are bound to their battery life. Most of the wireless headsets have long-lasting battery life, but they still need a charge to work. It can also get really frustrating if your headphone runs out of battery during your gaming session, or if your whole squad is online and are waiting for the headset to charge. I know many people will relate to that.

Price – One point for Wired Headsets

Now let us talk about the price. The wired headset will cost less than a wireless headset with the same specifications. That is because wireless technology is not that easy to manufacture, thus causing it to be costly.

You can get better sound quality and other features in a wired headset at a lesser price, therefore adding a plus point favouring wired headsets.

However, the discussion is not ended here. Some people’s points might differ from this conclusion. Now here is the little easter egg. If you read the article carefully, you might have read it at the start that “Necessity is the mother of all inventions”. This means is that it depends on the user’s need.  Some people will have an easy and better time with wireless headsets and some with wired headsets depending upon their needs.

Tags: Headsets are Better for Gaming