by Jeevan Gouda
in Business
0

Blockchain is the latest breakout in the digital market. Every major technology site or magazine is listing it among the top technology set to take over the tech world. Some are even going as far as naming it the next internet, with its benefits and features that seem to surpass our current internet abilities.

All in all, Blockchain is a fast rising technology that’s taking over the tech world, and has become a priority for businesses all around the world. That’s why lots of business owners are curious to understand this new technology, and are hiring staff that properly understand what Blockchain is all about.

While there is a good amount of hype following Blockchain, the possibilities are truly endless with this new technology. And as a business owner, it’s important that you don’t miss out on what Blockchain is, what it can do for your business, and everything you need to know about this fast growing technology.

Blockchain is a distributed ledger technology that stores information in the form of small computer cells called blocks. Each new transaction is connected to the last cell, creating a chain of database blocks.

It was originally developed for the digital currency trade, and became popular through services such as bitcoin and other cryptocurrencies.

However, as great as bitcoin is, the technology behind it is even better. And more businesses and investors continue to cash in on Blockchain technology, because of how ingenious an invention it is.

What makes the technology so revolutionary is its lack of need for an intermediary or third part interference during transactions. People can safely transfer assets from one part of the network to another part quickly and stress free. This decentralized network at this level is something that hasn’t been seen before. Blockchain takes decentralization to the next level by allowing the transparency of all assets on the network.

In our ever growing world, businesses around the world need this type of technology to survive in the digital world. Business leaders and entrepreneurs globally stand to gain a lot by learning what Blockchain stands for and what it can do for them.

One feature that has been missing from the present day internet is trust. It limits the possibility of safe and strong business transactions.

Blockchain is able to provide trust through its decentralization, immutability, and transparency. It distributes trust to all parties involved in each transaction. It also helps simplify the transaction process by securing the safety of everyone’s database. With Blockchain, no changes can be made to the database without everyone’s agreement.

Another thing Blockchain brings is a multi-party workflow where multiple individuals and companies can communicate on the same network. Some common examples include communication between the buyer and seller, transfer of money from one bank to another, and so on.

Blockchain gives us the possibility for a more efficient and safer transaction process. Businesses no longer have to worry over such issues such as inconsistencies with the transactions, privacy breaches, confidentiality, and so on. This is because all the transactions will be performed on a single Blockchain database network.

How Can Business Leaders Use Blockchain Tech 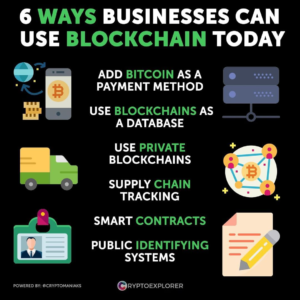 Many senior business managers continue to show an interest in Blockchain, and for good reason. While Blockchain particularly flourishes in the Finance and IT world, many other industry leaders stand to gain a lot from this new technology.

The distributed trust Blockchain offers has the ability to solve a large percentage of the problems in the digital world. For businesses that involve loads of transfer, and buying, stocking and selling, Blockchain allows the manufacturer, buyer, and distributor to communicate on the same network, with a level of transparency that hasn’t been seen before.

Even the government sector stands to gain from this new technology. Any service that requires the use of multiple parties to perform a single transaction stand to gain a lot from Blockchain.

Bitcoin is a great way business leaders can implement Blockchain into their work. Cryptocurrency continues to advance everywhere, and more businesses need to take a hold of that and use it to their advantage. Using bitcoin as a payment method is one of the best business plans a business leader could make. Bitcoins can be easily exchanged with different currencies like Bitcoin to Dollar or Bitcoin to Naira, or businesses can buy bitcoin on the Vertex Market. 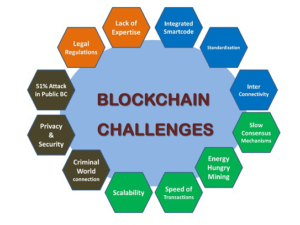 Despite all its grandeur and benefits, Blockchain still remains a relatively new innovation, and like all new innovation, it carries a lot of risk. The digital world is still largely in the dark about everything Blockchain is capable of, but there are some challenges you should be aware of as a business leader;

In the end, any business leader who wants to implement Blockchain in their business needs to have a proper understanding of Blockchain itself, the Blockchain digital market, and how well Blockchain can function on an enterprise level.

Every day, Blockchain continues to advance and threaten to take over the world of business. Some even see it emerging as a new and more developed type of internet.

The internet remains one of the most significant inventions ever, but it lacks a vital attribute that Blockchain is able to offer us. Trust. The lack of trust in the internet is what’s stopping the global takeover of the digital world.

Now more than ever, businesses need to learn all they need to know to empower their business with Blockchain. As the world moves toward a new era of the internet and digital world, with Blockchain technology at the forefront, no industry or enterprise can afford to be left behind.

Businesses who want to implement Blockchain technology into their business should develop an understanding of how cryptocurrencies relate to real money. Businesses can even invest in any country around the world through blockchain. Even Etherium is making buzz in countries like Nigeria, the businesses want to know how to buy ethereum in nigeria.

The bottom line is, Blockchain technology is not going away anytime soon, and business leaders should  have to educate themselves on what Blockchain is and all they need to know to survive as a business in this new Blockchain era.

8 Reasons to Get Your Cracked Foundation Repaired

Guide to finding an accountant