A Review Of Descendants Of The Sun

by Ethan
in Review
0

Descendants of the Sun may not be the best kdrama that has been made. But that doesn’t mean that it’s not worth watching. The show has plenty of moments that noth kdrama fanatics and casual viewers will surely appreciate. One of the best things about the show is its lead characters. The relationships between the characters is also something to look forward to. The show is definitely not lacking in romantic moments that people have come to expect and love from kdramas. And if you’re a fan of Song Joong Ki, then you really shouldn’t miss this show. Many are saying that this is his sexiest performance to date.

You can probably call Descendants of the Sun a military/medical drama. Women love to see men in uniform and having Song Joong Ki in a fatigue is probably the main reason why the series received so much buzz even before it started. This is also the reason why many were able to overlook the badly written script. But if you can get past the mediocre storytelling, it’ll still be possible for you to enjoy this series. And yes, maybe it would help if you don’t know anything about medical or military stuff. It seems that the show’s writers didn’t spend much time researching. Or maybe they just don’t care about making things accurate. They have a popular actor after all. 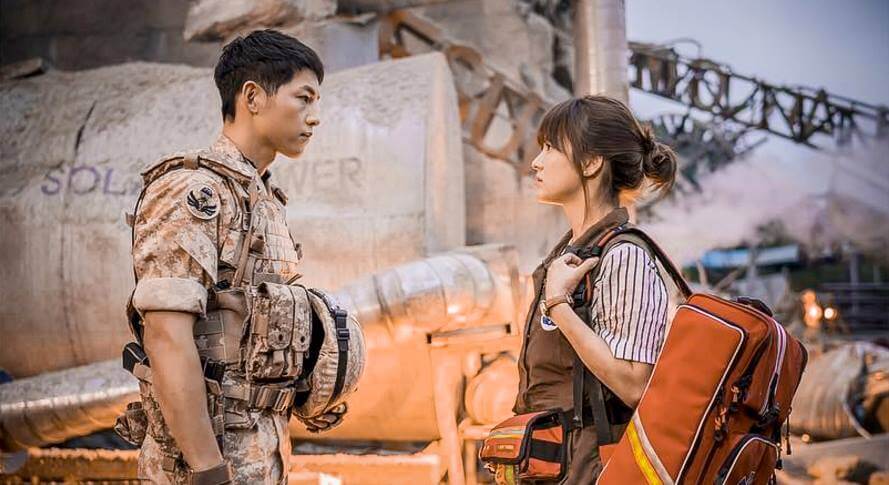 The show is not a total letdown, however. And if you’re a true kdrama fan then it’s not to be missed. It does have a lot of going for it. Its greatest strength is the performance of its actors. Song Joong-Ki is excellent in playing the role of Captain Yoo Shi-Jin. It seems like his stint in the military really paid off. His portrayal of a soldier is so believable. Song Hye-Kyo, another fan favorite, also gave a strong performance portraying Kang Mo-Yeon. Fans missed her since she focused on movie making for the past three years. She really provided authenticity to her character. The actors’ chemistry is also good.

Another thing that is commendable about the series is its bravery in breaking some of kdramas most treasured rules. In many Korean series, the man is often depicted as a macho hero whose mission is to save the girl. The female character on the other hand is often a self-absorbed individual who is always dreaming of meeting a Prince Charming. Shi-Jin is a complicated character and Mo-Yeon is a strong independent woman who can obviously take care of herself. It took a lot of courage for the series to deviate from a proven formula. But if paid off. Descendants of the Sun will always be remembered as an innovative and groundbreaking series.

Descendants of the Sun is definitely worth your time. It’s an joyable series with plenty of humor. If you’re looking for a light-hearted series to binge on, then you should seriously consider watching this kdrama. It has several romantic moments too and will surely satisfy the fans’ needs to see a good loving relationship on screen.

The New Normal: Preparation for a Permanent Shift to Telecommuting