3 types of Action Cameras: What are they, and which one is best for you?

by Marie James
in Gadget
0

Action cameras are small, easy to carry devices that capture photos and videos. They are used for everything from selfies to creating professional documentaries. You can easily attach them to your helmet or surfboard or whatever place you want to capture a great angle of yourself. Some point and shoot in the direction they’re facing, while others can capture a 360 sphere of everything around them. Oh, and some of them can even fly!

Firstly, how exactly do the original action cameras work? These are the “point of view” style cameras like the first GoPro. They normally have a long-lasting battery in them, and to use the camera, one should ensure that the battery is charged. The lens normally captures a wide range of objects and can focus on objects that are close by. This is with the help of the image sensor, which detects and converts light waves to amazing images or high quality videos. The slow-motion effect that is caused by the high frame rate; up to 240 frames per second! Storage on the camera comes from the SD card which is inserted into it.

Here are some things that POV cameras are used for;

Want to step it up to the next level? 360-degree cameras are a new way to view the world of sports. The camera’s position the photographer at the center of a spherical shot so that the viewer can see everything. You can see all corners of a single shot, the top, the bottom, left, right, and any other direction, bringing you back to the 360-degree view.

How do the cameras work? 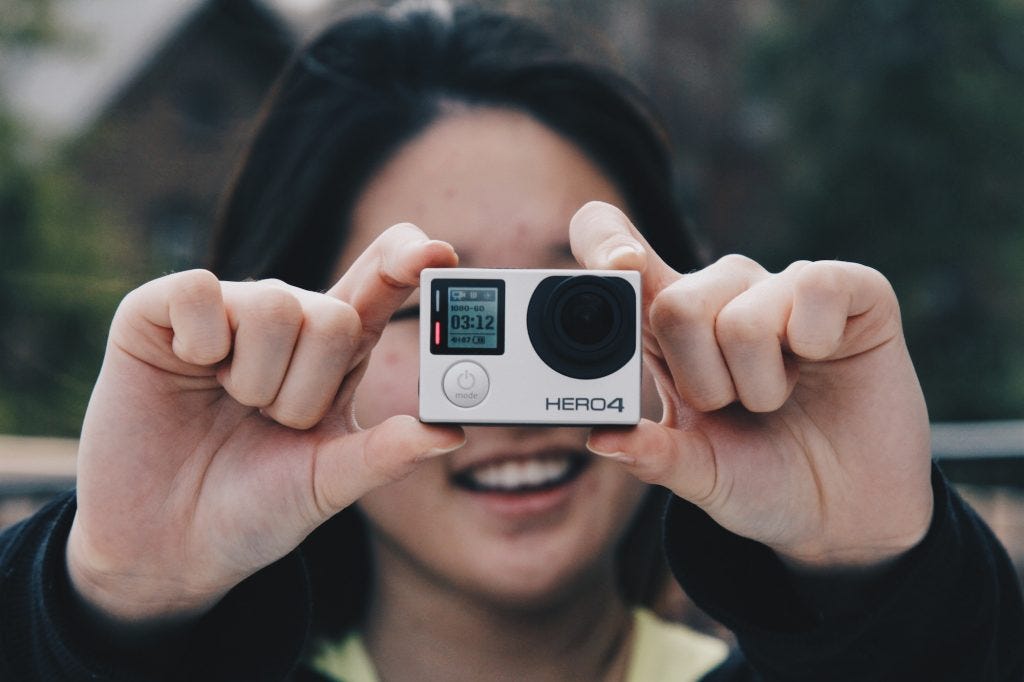 The 360-degree cameras work in two sections. The camera takes a video twice. Both of the videos are 180 degrees and from opposite angles. The final 360-degree image comes as a result of combining the two videos that were initially shot, giving the impression that it was taken inside a sphere. The two films are then stitched together to make one single image. There are two methods of stitching; the automatic process where you can use software which will automatically do it for you and a manual mode where you need to sit down and get rid of the stitch lines by yourself, which is a lot of work. Stitch lines are the product of the two images, and they have lines that show where one image ends, and the other starts, and they need to be invisible.

The beauty of 360 images is that the camera appears invisible. To achieve invisibility, you first need to get a selfie stick that is perfectly suited to the size of your camera lens. The selfie stick should not be too big, not too small. The next step is to center them properly, the selfie stick, and the 360-degree camera. Failure to center, and the selfie stick will be seen in the images. The last and final step is to position the selfie and camera like it is a microphone. Unlike other cameras, the 360-degree camera captures everything around, so you have to place it in a way that it can get everything.

You can transform the video of a 360 action camera to a popular, traditional video through the process of reframing. To achieve reframing, the photographer uses mobile applications. However, not all mobile apps work for your cameras. The app corresponds to the camera type. For example, if you use a GoPro Max Camera, there is an application that is specifically suited to that camera.

Let’s take our eyes into the sky for a moment, and then think about how small drones are becoming popular day by day. In the recent past, they have attracted many flight enthusiasts as well as hobbyists. You can hardly ignore their essence in the filming and journalism fields. It is in this light that we take a look at a few insights.

Consumer drones are small crewless or unmanned aerial vehicles (UAV) that are used in aerial imaging, aerial games, and recreation activities. They can take spectacular aerial shots, which is both fun and enjoyable. These commercial drones are ideal for consumers or hobbyists.

How do these drones work? Despite the sophisticated technologies that they feature, operating drones is relatively akin to playing video games. Ideally, you can control them remotely, whether you are using your smartphone or tablet.

These drones have a multi-propeller system, which makes them independent and cushioned against failures. The rotors in this system are critical in ensuring that the drone moves vertically and comfortably hovers. Further, the rotors help in maintaining their balance in the air.

The user will rely on built-in cameras onboard to see the surroundings of the drone. Given how effortless it will be to see different parts of an area, it will be easier to capture even the most intricate details of an activity like biking. Remember, they rely on wireless connectivity. A user can also rely on apps to pre-program the specific coordinates where the drone is to fly.

Further, wireless connectivity implies that you will monitor various aspects, including balance, battery status, and thrust, with much ease. Besides, their ultra-responsive nature makes things much easier in the long run.

Drones have become an innovative way of capturing the world, and sports events are no exception. However, there is an inclination towards small drones in such cases. That is because they are easily accessible for any consumer, whether you are skiing, boating, or biking. Besides, they are easier to fold and carry along in your trips. Ideally, their portability is unmatched, making them great action cameras!

The Story of the Girl in the Basement: Elisabeth Fritzl

4 Reasons To Hire A Corporate Lawyer