3 Reasons Why You Should Download a Marathi Keyboard App 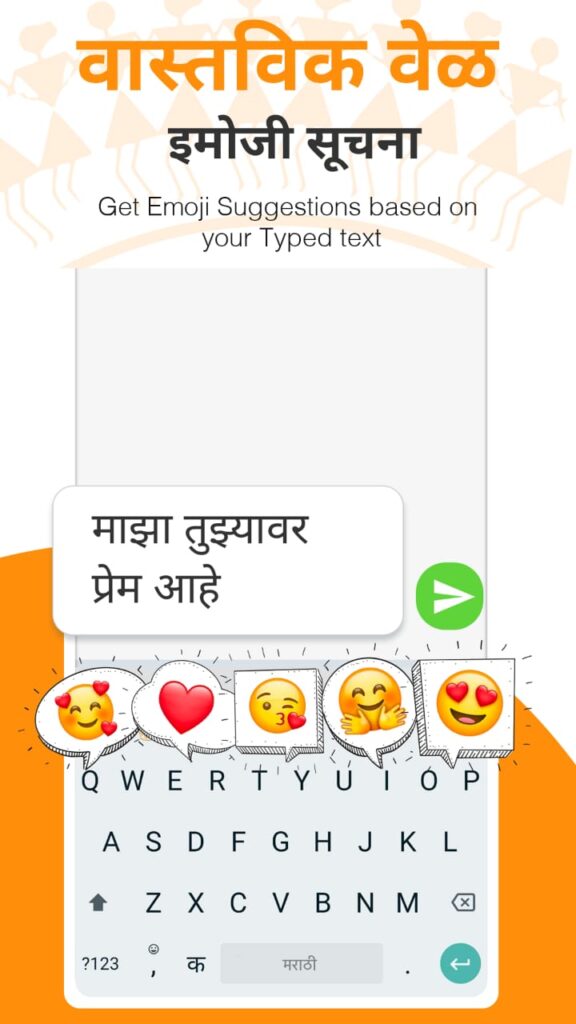 Our language is what set us apart from animals. Scientific research has shown that it was our ability to communicate in detail that allowed us to survive, make communities, and ultimately lead to our better cognitive evolution.

Humans find it extremely important to be able to communicate effectively.  A reason why we were not satisfied with texting when it first came to our lives. In the early stages of texting and typing, it was extremely difficult for people to express their emotions. Unlike face to face conversations, texting didn’t allow people to study other person’s body language. And unlike calls texting didn’t allow people to understand the tone.

People being creative thinkers came up with emojis and later developed stickers and GIFs. Today texting is one of the most popular forms of communication with more than 70 billion texts being sent each day.

But these amalgamations as famous as they were didn’t really did justice to the languages. They were not the true representation of how people saw their language.

Along came keyboard application with the few mainstream languages of India. First, it was just Hindi and then other languages like Malayalam, Marathi, and Bengali were added in.

Today any keyboard you buy will most probably come with these integrated languages. But due to lack of data, most of these keyboard applications are still unable to capture the true gist of these languages.

This goes for Marathi that is one of the languages that these keyboards have. In such a case, it is best to go with a keyboard application that is specially made for the Marathi Language.

An app that has lesser languages will have better spell check for the languages that they do have. Most Marathi Keyboards have just Marathi and English.

Many Marathi Keyboard has Marathi Stickers and GIFs which make these keyboard application even more tailored for Marathi audience.

Since the app is specially designed to cater to Marathi audience it works on more data than an app that allows all languages. An app that has all the languages works mostly on English whereas a specific language app will put all efforts to make the experience with that language better for its audience.

Make sure that it has its own library of Marathi content like Marathi Stickers and Marathi GIFs. A lot of people use the language Marathi in their default keyboard and download sticker apps separately to share Marathi content with their loved ones. But you don’t need extra space-eating apps when a lot of regional keyboard app comes with in-built Marathi sticker and GIFs library, do you?

Marathi is just for your close friends and family. Most use and you can have a few colleagues who you can text in Marathi. But you need an English Keyboard for people whom you can’t send texts in Marathi. For this reason, make sure to find an app that allows you to easily switch between these two languages. It will save you from a lot of mistaken texts in future.

These are two extremely important features when it comes to choosing a Marathi keyboard. A lot of people who are extremely well at oral Marathi often find typing or writing in Marathi a difficult task. The voice-To-Text feature allows you to say what you want to send and let the Keyboard type it for you. The translation feature lets you write Marathi using English keyboard. It also lets you write your message in English and then convert the whole text into Marathi.

There are very few keyboards who will fit the bill of the ideal keyboard. And most of the keyboards are still making themselves better. But a Marathi Keyboard that fits these criteria of has to be this Marathi Keyboard with Marathi Stickers.

This Marathi Keyboard Application for Android has an amazing library of Marathi content. Funny Stickers and Funny GIFs available in Marathi. But not just that the keyboard also allows you to customize many stickers and GIFs.

Users can customize them by either adding text in Marathi or English language. Or users can add their own face too Marathi sticker templates available with the apps animated avatar feature. Any Marathi user can download the app and after installing it and make their own avatar by clicking a selfie.

The app also has one tap language switch option that allows users to switch from Marathi to English And from English to Marathi.

This app has state of the art voice to text feature. And this is a deal maker. Along with this, you can also find Quotes and Shayaris in the app to share with their friends and loved ones.